As my son fine-tunes his babble, I think back to a linguistics class I took in college on bilingualism. The reason I took it was self-serving, in that I needed it to fulfill a linguistics credit as part of an ambitious double major curriculum, as well as self-preserving because I had just finished a semester of Linguistics 101 and would shoot myself if I took another semester. The course was fascinating. As a bilingual myself, I wanted to understand how people learn multiple languages growing up. How do you know that one word or the other is in one or another language? How do you learn the nuances of certain words when they are tied to one or the other culture? How does your head not explode with all that double, triple or more language intake? 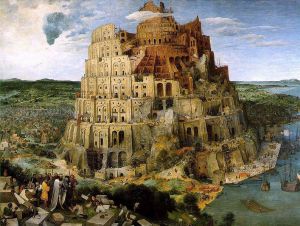 I remember very little about how I developed language-wise growing up. I just know that I was lucky enough to grow up in a bilingual family. Even more so, since the two languages, English and Italian, despite sharing the same family tree, are two very different branches. I picked up French and some German along the way for good measure before becoming lazy (my older sister actually speaks something like a bazillion languages, but she is a total nerd). Now that we are both parents we ask my mother what it was like watching us learn two languages, but listening to her anecdotes there does not seem to be a defining moment in time in which we went from mixing languages to compartmentalizing them. Like most people I know who grew up in multi-lingual households it seems that it just happens without great fanfare that your brain suddenly reorganizes itself to instantly process all those languages simultaneously, but each within their own cognitive stream.

The course I took drew pretty much the same conclusion. The brain, the textbook and research seemed to suggest, just “figures it out” (to use a very scientific expression) like it does with so many other functions that we learn to perform while growing up. The sponge-like qualities of youthful brain cells aid you in absorbing all the nuances that are vital for becoming a native speaker or mother tongue (which is not at all the same thing as being fluent). This includes all the cultural implications that word choice, inflexion, accent and all the other components of coherent native speech require.

And yet, I look at my son as he babbles a mix of Italian and English words into what I can only assume is perfectly comprehensible speech to him (it is, I confess, very convincing), and wonder when the switch will be flipped so that he will fully comprehend that he is in fact dealing with two different languages (or maybe as always I am completely underestimating the power of a child’s brain – as proven every time he manipulates me into doing whatever he wants). As a parent I wonder if there is anything that my wife and I can do differently to help him along, but for now we stick to the plan, which has no scientific basis other than the use of some logical thinking, that sees me using English when speaking to my son directly and Italian with my wife and she only uses Italian with him (unless she is mad and then she switches – don’t ask me why – to a venomous English and yes I get the same treatment when – supposedly – I do something wrong). We figure he has enough exposure to English on a daily basis so in the family setting and when he is alone with my wife he needs to hear Italian to make sure he picks it up (as well as when we go to Italy to visit the two sets of grandparents and the rest of the family).

I am excited for him, though, because the luck of the draw will give him a unique vision of the world from two very different cultural perspectives. Ideally he will take the best of both worlds (unlike his Old Man!), but I know how hard it is to stay away from all of the bad habits that each side of the cultural divide temptingly offers.

Despite the many rotten apples that I have encountered (far and wide) in my life so far, I grew up convinced that the world is beautiful because it is varied and I still would not have it any other way. Despite all the variables (good and bad) that keep you on your toes (not at all a bad thing in my typical “Cynical New Yorker” opinion), I do hope my son embraces the same fundamental vision of the world. It makes life so much richer.

9 thoughts on “Tower of Babble…”