I am following up on my OCD tendencies and the Brother P-Touch that I received to help fuel those tendencies. The challenge (and parents will appreciate the difficulty level on this one) was to organize and label the kids’ playroom, which in NYC also means the nursery/bedroom since 99% of us live in sardine cans. The challenge coincided with my eldest’s recent obsession with the alphabet, which is a post in and of itself. 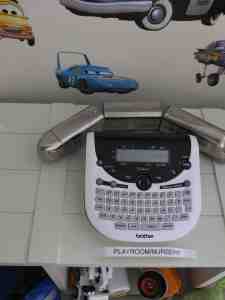 The Brother P-Touch is very intuitive and does what it is meant to do: print labels. Simple and functional which is a parent’s best friend. I thought I would show the progress on the toy cubby. I confess that I chose this particular area of the playroom because it is the one place that never ever remains neat for more than a few seconds. I saw it as an opportunity to document what it could look like when arranged properly.

Of course, my wife thought it best to send in my three and a half year old to “assist me” also known as “keep him busy.” The writing on the wall (not the one my son has made with his crayons, but the figurative one) said “Good Luck!”. The project started with my son successfully ejected half of the tape from the P-touch. I was somehow able to roll most of it back into the cartridge while he busied himself with changing the menu settings on my point and shoot. I managed to print out the labels I wanted to attach to the cubbyholes by offering duplicates as sacrifices for my son’s entertainment.

This actually brings me to my eyewitness account and visual proof that these labels are pretty damn near indestructible. You will notice in the photo that my son has taken one of the labels and used it as a sling for his Lego bus. As always kids find fun in the darnedest things and he ran around the room swinging the bus tethered to the label (disclaimer: kids do not try this at home!). Undaunted and with total disregard for my own safety I seized upon his moment of distraction and taking my eyes off of the rotating Lego bus, I started labeling and tidying up the cubbyholes. 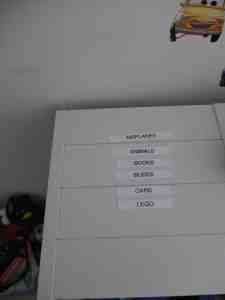 And then I felt stare upon me. He was close. So close I could smell the organic free range PB&J sandwich he had eaten earlier. A sense of dread and foreboding overcame me.

“Daaaaaaaaady! A, B, C, Dsssss!” he yelled as he went after a few of the labels I still had not attached.

“Noooooooo! I neeed A, B, C, Dsssss!” and just like that he was off running down the hallway.

“Crap!” I whispered and pulled out the Brother P-Touch and powered it up as I kicked the door shut and locked it.

I ignored the thudding at the door and quickly printed out the stolen labels and frantically stuck them to the cubbyholes. I stepped back to admire my work. The point and shoot immortalized the almost perfect tidiness of toys all in their assigned place. I took one last glance to admire my masterpiece, sighed, turned and unlocked the door.

NB: I wrote this review while participating in a campaign by Mom Central Consulting on behalf of Brother P-Touch and received a product and gift card to facilitate my review and a promotional item to thank me for taking the time to participate. All opinions expressed are my own.