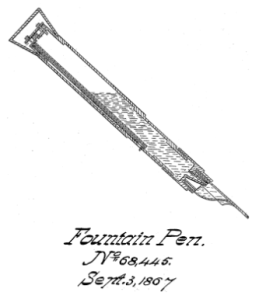 One of the few things left for me to really call my own as a parent and dad is my love of fountain pens. It’s certainly a head scratcher for many people (my wife and many of my friends included), but I just can’t get enough of them. I actually use my fountain pens and not just as a fashion accessory (although the aesthetics are just as important to me as how they write – in my case, though, I don’t care if other people think my pens look good – I know they do!). My premise is necessary because too often I see the typical Wall Streeter (that’s code for filthy stinking rich jerk in my neck of the woods – the jerk part being what pisses me off about the whole thing) flashing pens that cost the equivalent of a small country’s GDP and really only use them as women use engagement rings – to show off whose is bigger (relax ladies it is just an analogy – maybe a bit offensive to you, but the guys are all nodding their heads). And just like women often haven’t a clue about the 4Cs of diamonds other than what Vogue tells them, most Wall Streeters buy these pens just because Cigar Aficionado or Robb Report tells them it makes them look rich and important (code for you’ll get lucky not matter how much of an ugly creepy jerk you are – although sleeping with someone because they write their cell phone on a bar napkin with an S.T. Dupont Limited Edition James Bond fountain pen 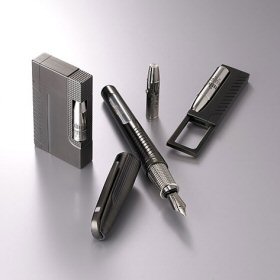 is a bit of a stretch, but hey, it’s my post so I can say what I want) and not because they actually want to write with them. That’s not to say that I wouldn’t buy things that make me look rich and important without truly knowing and appreciating their value beyond the price tag – like a Lamborghini 350 GT or a 2000 Château Lafite Rothschild for example (not that I am in danger of owning either anytime soon) – but fountain pens I know so it kills me to see them used as bling.

I won’t bore you with the list of pens that I have (i.e too many) or want (i.e. too many), but I want to tell you why I love fountain pens. So bear with me.

Is there really one pen that is better than another? There are certainly “better” pens, but it depends so much on usage and taste that it is hard to draw a line in the sand. I would argue that with so much of today’s correspondence and note taking done on computers why would you not want to maximize your sensory experience when writing things “old school” with actual pen and paper? I would encourage everyone to consider trying it out if you do not already do so (yes I will bore you with my taste in paper in some other post) and you can do it without spending a fortune on a fountain pen. Buy a Pilot Varsity fountain pen at your local stationary store or online and try it out. If you like it you can find a nice fountain pen that fits your writing style and gives you that incredible sense of well being when writing with it (yes people it’s pen porn – some dig it others don’t). If you need advice you can ask me or check out the many forums out there that talk about everything fountain pen related (FPN, FPC etc.).

I know I promised not to list my collection or wish list, but I think it would help (for those interested) to jot down a few fountain pens that are fairly well known, a few that are rare and a few that for different reasons are considered worthy of use: some on a daily basis and others for special occasions. 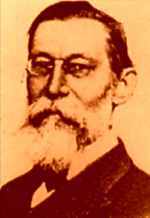 To start off my (hopefully for you) short monologue on fountain pens I have to talk about the “who’s your daddy” of the bring-it-to-every-corner-of-the-earth practical fountain pen – L.E. Waterman.

Although, the Waterman company has lost some of its luster over the last century and has moved to Paris (currently it is owned by Gillette – yes “the best a man can get” guys) all discussions about fountain pens as we know them today must start here even though strictly speaking he did not “invent” the fountain pen.

You also cannot fail to mention Sheaffer and Parker pens and the noticeable mark they made on the history of fountain pens – the Parker “51” has it’s own book and is considered by fans to be the best pen ever made! Then there are the Japanese who brought us the elegantly minimalist Namiki (part of Pilot pen company, although Namiki is actually the company and founder’s name before it was changed) fountain pens and especially the Namiki Limited Editions which are handcrafted beauties. I will also admit that when I do on occasion use regular pens Pilot is only one of two companies that I will consider. Their Pilot Precise V5/7 Rolling Ball and Pilot G2 Retractable Gel Ink Rolling Ball are the smoothest writers out there along with the Zebra F-301 made by another great Japanese company by the same name.

Moving on to the practical, but rare fountain pens you can find a Montblanc Noblesse (not the Oblige, but the one modeled after the Aurora Hastil in the early 70’s) in simple brushed metal, mine was handed down to me from my dad, from whom I caught the all-things-stationary bug and I do hope that my son follows the trend (he already does in his own way show his love for my pens by attempting to use them as drum sticks on his train table – I say attempt because I usually tackle him before he can execute his best “Animal” from the Muppet Show impression).

Back before Dunhill bought Montblanc in the late 70’s (and decided to push them squarely into the luxury bracket where the Richemont Group continues to keep them today), the company used to make a lot of no-frills workhorse pens much like today’s Staedler or LAMY, alas the Montblanc Noblesse is no longer produced (well constructed affordable instruments rarely are) so you will have to hunt for them on eBay or at flea markets. 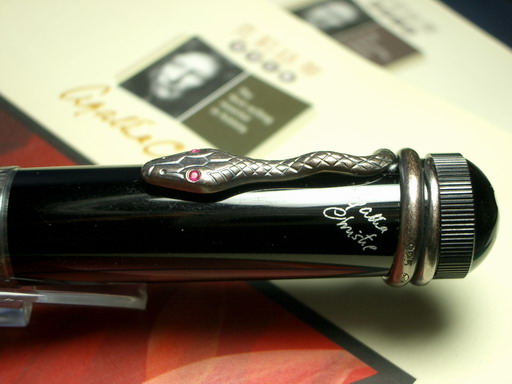 If you want to go for a more elegant look then certainly a modern Montblanc like the Agatha Christie LE fountain pen works well (although your wallet will take a nice hit) as do vintage Pelikans and Watermans that have that simple yet elegant style that seems to remain elusive to many contemporary pen makers.

Visconti pens, although certainly contemporary, along with the much older Conklin brands and the exquisitely eccentric Conway Stewart pens are amongst the few pen makers that continue to use an incredible array of celluloid and multi-colored plastics for pen barrel production which gives each pen a custom look, as opposed to simple resins and metals (although the Visconti Titanium Skeleton is quite a unique pen even though it is made with monochromatic Titanium). Tibaldi, for example, has some great vintage multicolored celluloid, although today they seem to be experimenting more with precious metals.

Then there are the “artwork” pens that are made by the likes of Krone and Michel Perchin (of Fabergé heritage) that are so heavy or bulky that you cannot write with them, but they are indeed works of art.

There are enough materials, styles and price points to satisfy anyone when it comes to fountain pens and although today, certainly, many of the big names in pens seem to cater a bit too often to the Wall Streeters I mentioned earlier, there are still many who are doing it because of their passion for fine writing instruments. There are also enough vintage pens with very affordable price tags out there to start your own collection. My collection I hope to pass on to my son and I will go out on a limb here and say “It’s a guy thing” (or rather “It’s this guy’s thing”). My obsession with fountain pens is some other guy’s fixation with motorcycles or cars or fishing or hunting or the office Fantasy Football pool or slipping into Peter Rabbit slippers or whatever it is that a guy can’t wait to do in his “my time/my terms” moments. Then again I am sure a lot of you (those brave enough to have read this far) are probably thinking WTF is this guy going on about?! Wait until I start talking watches.